Hello you. I’m back once more for the weekly update.

So of course I’ve edited a bit, but I’ve also started on a new project when I had a bit of free time. This doesn’t mean we are finished editing, just that I’ve caught up with the co-author and I didn’t want to change things while they worked out what they were reviewing.

I’ve explained a bit of the new project to some friends, and they seemed excited for the premise. I still have some things I need to work out, but so far I’m happy with what I’ve put down. Of course I think I can make it better later, but it seems readable so far. Perhaps I’ll work on an outline for it, as so far I only have the main premise, and a bit of the story worked out.

The other thing I did over the weekend was watch a couple of movies. First I watched Ant-Man and the Wasp, and I really enjoyed it. It was exactly the type of fun movie I was in the mood for, and it was all around amusing. I’m not sure why people aren’t excited about his movies, but I enjoyed the first one as well. Perhaps because while it connects to the MCU, it isn’t hugely influential. Though I think we’ll be seeing more of Ant-Man for the next Avengers movie.

So being in such a good mood, I felt I could try to watch the Solo movie that everyone said wasn’t so good. Now I don’t know if it was because the movie right before it had me in such a good mood, or some other reason, but the Star Wars Solo movie was actually quite good. Perhaps not the best movie I’ve ever seen, but quite well done. Good universe building, and all that, and I enjoyed the characters. Yes, I can see that taking away some of the mystery of Han being not so great, but it felt true to the character. That could be in part to them lifting lines Han says from the original trilogy, but it didn’t feel completely out of place. So I’m not entirely sure why it garnered so much hate. Perhaps I liked it more than others because I was prepared to hate it, and was pleasantly surprised. Disney may be an evil corporate machine(I’m just quoting others here), but they can still make a decent movie. But I will say I really wasn’t a fan of The Last Jedi… at least half the film. But we’ll see what the future holds.

I also watched The Incredibles 2. It was fine. Simply a movie, and well animated, but it felt slow in some places. I didn’t hate it, but I think the first one was better. At least it didn’t ruin the universe, and perhaps another film can be milked out, hopefully better than this one. But even if it isn’t, it’ll probably be okay. I still say that first film is the best Fantastic Four movie out there, though I’m quite a fan of the 1994 version, even if it was on a shoe-string budget. It had some of the best lines and delivery out of all the other Fantastic Four movies I’ve seen.

And that’s really it. I wasn’t feeling great over the weekend, and perhaps because of that I didn’t do much, but I’ll be feeling better soon. So I hope you have a great week. I’ll talk to you next time. 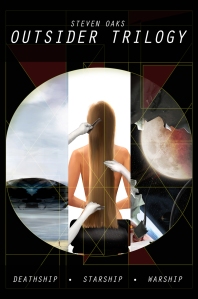 Link to my author page on Amazon – http://www.amazon.com/Steven-Oaks/e/B00MEGSEZ6

Link to the Deathship book in the CreateSpace store – https://www.createspace.com/5023771

Or you can help me out on Patreon. Again, thank you. https://www.patreon.com/StevenOaks